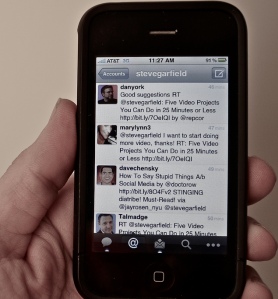 Are scheduled Twitter broadcasts effective or just another form of SPAM?

We’ve all been there. It’s getting late and it has been three hours since you checked Twitter, Facebook or Linkedin and who knows what calamity or gossip has unfolded within this timeframe. Relief and comfort consume your senses as your fingers grasp your device and you readily tap the screen en route to digital enlightenment. As you eagerly flip through the lineup of tweets, you begin to mentally log (briefly) the content being offered in each tweet. Free e-books… check. 5 Best Results for More Facebook Engagement… check. 15 Sure Fire Ways to More retweets… check.

Wait a minute. These are all coming from the same Twitter handle!

Flip some more and you discover seven of the last 12 tweets in your scroll are from the same Twitter account. Three more of these types of Twitter scheduled broadcasts later, you are finding original tweets becoming the minority.

Have we been spammed?

Believe me, I’m like most of us trying to find our place in social media and very appreciative of all the best practice and tips offered for a simple email capture. But having to gloss through what seems to be a myriad of repeated tweets – is not appreciated. After all, our time is precious and we want to be treated as a person not another Twitter account.

Hoping I am not alone in my presumption, I polled some peers and was surprised to find consensus. Many Twitter users are finding a certain annoyance at scheduled broadcasts and it’s growing. So I ask,

‘When is self served promotion too much? Where is the fine line between shilling (let’s be true email capture is paramount with these ‘freebies’) and sharing? Are these scheduled broadcasts really just another form of SPAM?’

Kevan Lee of Buffer Social details the tried and true rules of self-promotion in his post, ‘The Art of Self Promotion on Social Media.‘ Kevan encapsulates each set of rules to make sure you are following a set of guidelines when engaging your community through Twitter.

He goes on to report that using a 10-tweet bracket, 5-3-2 Rules of Social Sharing by T.A. McCann of Gist.com is a good start. Five must be content from others, three from you and two that are of a more personal nature. This sounds right. Especially when you put community in front of yourself when tweeting.

Continuing with this list, Andrew Davies of Tipping Point extols a 4-1-1 rule. Four pieces of relevant original content from others with one retweet for every one self-serving update. Fair rules that represent a good approach where you lead with content containing professional enrichment and peer advocacy.

This year Sam Milbrath of Hootsuite asked us, ‘Are You Following the Social Media Rule of Thirds?’ Sam looks at this through a more practical lens towards for-profit needs in social media. One third allocated to promote your original business content aligned to new readers and profit. One third to promote, share and advocate thought leadership. One third allocated to more personal attributes when building your personal brand. Sam gets it. Ultimately it is about making money and building community.

There are others, but the point is made. If more and more companies and organizations use scheduled Twitter broadcasts doesn’t that completely veer from these sensible engagement rules?

Take the 555+ rule by Shai Coggins of Vervely. If there is any more fair and just approach to self-promotion, let’s see it. Five updates about you and your content. Five about others that are usually peer driven. Five responses and replies, and always pay attention to other add-values as user-generated content and fun stuff as #FollowFridays and #ThrowbackThursdays. This is hands-down my favourite as it hits all the marks or developing a solid community of followers and ultimately consumers. It also takes social media back to being fun – and we are treated like a human not another Twitter account.

What if we embrace the 555+ rule and ‘lock and load’ our scheduled broadcasts. Are we not back to square one?

“… in the rush to exploit social media as marketing tools, way too many users have gone from engaging with social media to spamming it – to sending out as much stuff as they can as often as they can.”

He further underscores the ignominy of scheduled tweets in saying, ‘One of the most conspicuous examples these days is the scheduled tweets …. I am embarrassed for them sometimes, when their incongruous pre-scheduled tweets arrive, oblivious to what people are actually discussing.”

Harsh words or the truth? Has scheduled tweeting and its resulting broadcasts delineated the rigor of self-promotion? Has the good work of McCann, Davies, Milbrath and Coggins gone to the wayside because of this new Twitter tactic?

Buffer and Hootsuite are two of the most progressive and dominant companies offering social media marketing tools and equally purport their scheduling products to add value by having a deep repository of interesting and valuable content.

This seems fair, but we need to hear from not the client selling a product but the audience who are targeted to buy their product. At 11 in the evening trying to catch up with my Twitter traffic, more is definitely not better.

Tweeps, what are your thoughts?

It’s All About Community